As artists, creatives and writers, we often do not see an immediate or obvious result from our efforts. We put ourselves out there, our art, in whichever form it presents itself, hoping that someone will connect with it as much as we have connected with it.

At times, this can be a long wait, through which staying positive and staying motivated can get really difficult.

In times like those, I tend to grab everything positive I can find. May it be a nice comment I receive, an additional follower on a social network, or simply the beauty of the designs my fellow artist put forth. Other times these efforts are a lot more deliberate, which is one of the reasons I participate in the weekly gratitude list on Fridays, and from now on will also participate in this positive blog hop: “Reasons To Be Cheerful”. Maybe the appeal is writing it down and sharing, maybe what I like about those hops is that it includes lists – and I am a list person – but the result is the same – it brings back some of the state of mind that keeps me going, keeps me motivated, and positive, an expect and state from which it is so easy to create from.

Here are my reasons I can be cheerful this week:

1. I finished another floral design!
Despite the fact that this week has been hectic, I managed to create another floral design last night. Considering how dark and dreary it had been outside over the last few days, I craved something bright, and it manifested itself into this very bright yellow flower. It is a digital manipulation of a picture of a flower I took quite a while ago. Adding the dark green background really made the brightness of the yellow come forth. Here it is:

2. I am getting used to my part-time job
I started a part-time job this week, helping in building a friend’s business. My husband and I are working on that as a team, and while it has been challenging, I am beginning to get to hang of it. New programs do not look as foreign anymore, and I do not feel like I do not know what I am talking about when I make necessary phone calls, which are a part of my job.

3. I was able to make a fellow artist happy!
I posted an interview with a Zazzle designer and author yesterday, and her reaction to the post was really cool! It was fun to talk to her about her work in the first place, but knowing that I made her happy was just wonderful.

What reasons do you have to be cheerful today? Why not join this blog hop and share your list with everyone!

Brett Manning (born on Halloween 1986), always loved to draw, paint and create.
Her drawings and paintings have a warm, feminine strength, that manifests itself in clean lines, and interesting contrast.
Her work does not only include drawings but are  also inclusive of photography, in which she sometimes expresses a rather dark side.

Here are some examples of her art 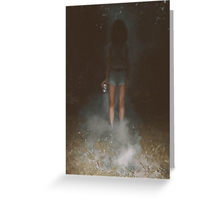 The 4th by Brett Manning

You can find this talented young artist on RedBubble.

it does not matter

how pretty it is here, ’cause

I am not with you

If you enjoyed the above haiku, why not check out my book

I miss the warmth of your gaze, the fresh clarity of your eyes, as if looking at me, you could see my core. No secrets ever hid from this look, a gentle one, directed at me with such love, that even now my heart skips a beat, just thinking about its power.
Within those precious moments, your blue eyes resting on my green, I could see forever, endless possibilities without anything holding us back.
Those moments, as I am waiting for your return, sustain my very existence, every breath apart, filled with the sweet anticipation of your return.

This post was inspired by this weeks Five Sentence Flash Fiction Prompt: “Fresh”.

(Disclaimer: The above image is by talented artist Eva Nev, and is called “Mauve Flowers on Tourquoise Background“, and is available on RedBubble, of which I am an affiliate – helping independent artist connect with a broader audience) 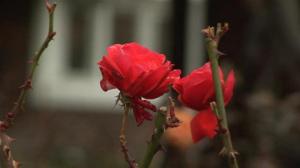 “Well, to be honest, I threw it away.”
“You did what?”
“It was just sitting there, all torn up, and old-looking. Who keeps stuff like that?”
“I do, you….” She bit her check to keep herself from throwing every cuss word she could muster.
“Never mind. How long ago was that?”
“Maybe ten minutes.”
“No, don’t tell me that was right before the garbage truck came?”
“Of course it was, silly. That was the whole point of me rushing to take out the garbage. I don’t want this stuff to fill up the bin over the next three days.”
“You are just too efficient.” She grimaced, as she knew that the sarcasm would be completely lost on her assistant. As expected he trotted off, proud of his accomplishments and efficiency.
He was new, he was good, and he was overly productive. He wanted to please her, and showed it by cleaning her desk more frequently than it ever had been over the last 5 years she had been working from home. Not that this was a bad thing, but it also was not the first time, she had to rescue something that he did not consider as usable anymore.
Bell treasured trinkets from the past, little items that reminded her of her Grandma, of their rose garden, and of the long summer afternoons spent together sharing stories, drinking tea and coffee, while savoring homemade cookies and cakes. Grandma Rose, as everyone had called her, was a lover of stories, always weaving a newly crafted web of intrigue, love and adventure, pulling all of her listeners into her web with an ease, Bell now tried to capture, as she wrote her own stories. Because of her, Bell had fallen in love with words. Because of her, she had become an Author. With enough work on her plate, that warranted, no, demanded a personal assistant.
Who drove her mad.
That envelope had been not just any old, torn envelope. It contained a picture of her, her mother, and her Grandmother, in their rose garden, a photograph that had seen better days. Bell had been contemplating of having it restored, and a copy made for her parents.
She shook her head, trying hard not to get emotional. After all, vivid memories of beautiful times were burned into her heart, and no photo or the loss of it, could be more meaningful than that. Still. This one was special.
Walking through the french doors upon the patio, toward the back entrance, she squinted at a small, rectangle something caught in the thick rose-bush, that flanked the small path toward the small gate. It moved fiercely in the wind, but the rose-bush had a strong hold upon the item, its thorns grabbing it, not unlike human hands holding on to price possession.
Sighing in relief, Bell grabbed for the envelope, which released with ease and gentleness into her hands.
A smile deepening on her face she whispered softly. “Thanks Grandma.”

This story was loosely inspired by today’s Daily Prompt. 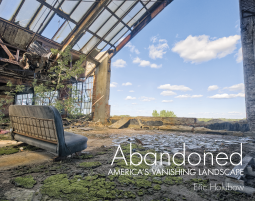 “For a relatively young country, America is rich in decaying ruins that cover its landscape. Through his striking photography, Eric Holubow provides a glimpse inside these perilous structures to reveal the slow but unforgiving wear and tear that has befallen many of the country’s forgotten sites. What transpires is a surprising, yet undeniable beauty beneath the rubble and decrepitude. Centered in the Rust Belt, but spanning from coast to coast, north to south, and big cities to small towns, breathtaking images of nearly a hundred sites, including factories, churches, theaters, prisons, and power plants, signify the comprehensive erosion of important parts of our history. Holubow’s compelling work forces us to pay attention to formerly grand, significant landmarks and institutions that have long been ignored, and reminds us of the tragic fate that they and everything we know eventually share.”

A compelling look at the ruins that are scattered around a country, offering a glimpse of broken dreams, history, in a society that loves the largeness of design, but is willing to abandon it with a totality that is surprising. What struck me the most are the images that showed the sign of abruptness, such as the leaving behind of work boots in the ruins of a factory, or the school books still placed in perfect order on the shelves of an abandoned school. Inviting us to imagine the stories of these places, Holubow captures the rawness of these buildings in his striking images with an impressive clarity. If you are a fan of photography, check out this volume.