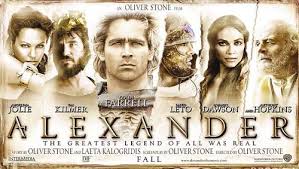 While of course this is a movie rather then a documentary, produced by an epic, and larger then life director, it is essentially the story of a great man. There are sure ways the execution of it could have been done better – rather then switching back and forth within the time line, it could have been done linear, but the care it showed for each individual character was superb. As a fan of Jared Leto, I was drawn to his performance, which was as I expected exceptional, as the best friend, and essentially true love of Alexander. Colin Farrell gave an charismatic, emotional and convincing performance, even if it was considered controversial, and I have a feeling not well received because of that. Glad, that I had only heard of a hint of the controversy about the movie and its main characters relationship with two males, to whom he was closer then any woman, I saw only the depth of their relationship, rather then the dissatisfaction that others have expressed about the film, because of it.
The fight scenes where epic and grant, nothing less is to be expected by an Oliver Stone project. Sometimes the gore was much, but war is not pretty, and should not be described as such, and back then it was even more personal and therefore more explicit. Maybe it also hinted on stereotypes when it expanded to include the people of Asia, but it is after all a movie from the view of a limited worldview, of the times of the beginning of exploration, rather then after it.

In all I really enjoyed the movie, I enjoyed the care of portrayal of each characters, the emotion, the visual execution, and its depth. Having one of my favorite actors, and musicians in its cast (Jared Leto), was the icing on the cake.