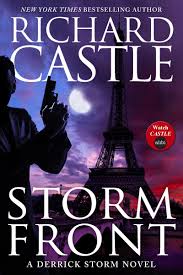 From Tokyo, to Bonn, to London, high-level bankers are being tortured and murdered. The killer, caught in a fleeting glimpse on a surveillance camera, has been described as a psychopath with an eye patch. And that means Gregor Volkov, Derrick Storm’s old nemesis, has returned. Knowing only one man can match Volkov’s strength and cunning, the CIA calls on Storm to track him down, figure out who he’s working for and why. With the help of a beautiful and mysterious foreign agent, Storm discovers a plot that could destroy the global economy bringing with it untold chaos and the time he has to stop it is running short.

I am a fan of the show Castle and love the attitude that Nathan Fillion brings to the character, even if the storyline tends to be a little cheesy at times. But what intrigued me even more, is that someone took the time to write the books, that supposedly made Castle so famous, and created with that, actually enjoyable novels.

Storm Front, a spy thriller, is one of these books. Surprisingly well written, it is funny, tight and full of action, without losing the voice of Richard Castle, making it a story within a story, that is well worth diving into. At times a little too sarcastic and leaving me with the hint of the feeling that the writers of this book poked fun at the readers, I still enjoyed the novel, which reads like a well-crafted spy novel should. Full of twists, turns and romance, while always finding a way to make me chuckle in the most unexpected ways. I am glad I picked up this book, now I just wish, I could actually congratulate the person or persons who wrote this little gem, for a job well done.